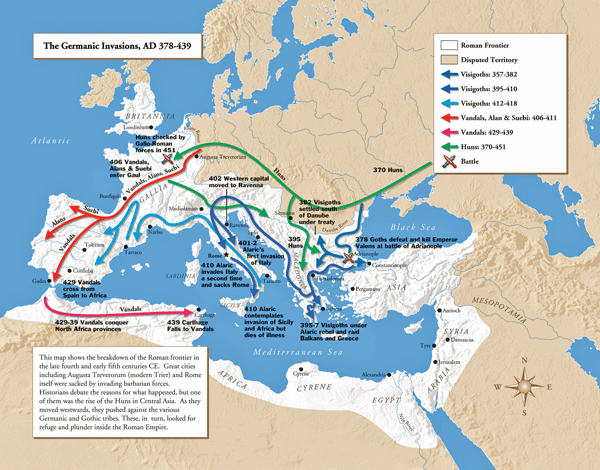 Almost all of the barbarian invasions of Italy, coming from the great plains of the East, found a natural passage in what is now the Veneto Region. The invasions of the Quadi, the Marcomanni and the first Goths date back to the IV th century.

The Barbarian Invasions of the Dark Ages

Those of the V th and Vl th centuries, though, were more serious for Veneto people. The invasions by the Visigoths, led by King Alaric, were particularly crucial. His invasions from 401 to 403 destroyed much of the area until he was beaten by the Roman General Stilicone at Verona. Then again from 408to 410 the Visigoths passed through the Veneto when Alaric completed the conquest and looting of Rome. Then in 451/452 the invasion by Attila’s Huns brought about the destruction of Aquileia, Feltre, and other cities. In 463 that of the Danes invaded, from 475 to 493 those of the Heruli, the Sciti and then the Ostrogoths led by Odovacar (with battles on the Isonzo and at Verona). Then Theodoric’s invasion passed through the area and who chose Ravenna as his capital and constructed buildings at Verona and Pavia between the years 493 to 526.

Through the efforts of Narsete the reign of the Ostrogoths ended in 553, and much of Italy then became a province of Byzantium for a considerable length of time. In 568 Alboin and his Longobards descended on Italy, conquering all of northern Italy, excluding Venice, Liguria, the Exarchate of Ravenna and Pertapoli. His empire lasted until 776 when Charlemange, summoned to Italy by the pope, deposed the last king Desiderius after beating him at his strongholds in Pavia and Verona. The Franks had also invaded norther Italy in 594, looting and destroying at the expense of the same longobards, who had created in Veneto a number of Dukedoms (Treviso and Verona in particular), sculdascie (Belluno and Montagnana) and gastaldati (Monselice). They remained the owners of all the mainland and caused a great deal of destruction ( Padua in 602, Oderzo in 639). They were also responsible for the economic and social disruption of the ancient centers of Aquileia and Atino.