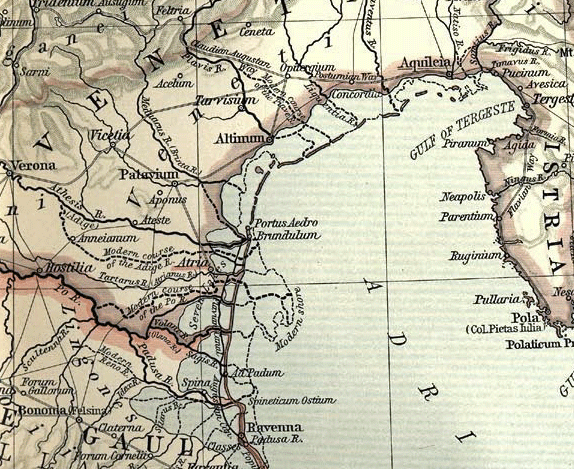 The Romans were already present in Veneto around 250 B.C., but colonization began in 172 B.C. with the foundation, or fortification of certain towns, such as Padua, Bassano, and Cittadella.

This map is an old archive map showing the shore line of the Adriatic during roman time.  Note: How much further inland was the lagoon of the eastern shores.

The peaceful process of absorbing the Veneti was already underway then. In 140 the Veneti fought alongside the Romans against the Gaul's and from that moment on they are no longer spoken about, it seems for their service they were made citizens of the empire. Rome continued to expand, in great style: the region was considered especially important as a communication center with the North and the East. Roads were built, canals dug, river banks raised and important cities built ( Verona, Vicenza, Oderzo, Concordia, Altino). Later, when the Veneto region had already become “Xa regio, Venetia et Histria”, Aquileia was founded as a bulwark against invasions coming from the East and as a great port on the Adriatic.

Some of the most important Roman Roads were Via Anicia (from Ravenna to Altino), the Popilia (from Padua to the Alps), the Claudia Augusta (along the Piave Valley towards Cadore) and the Postumia ( from Verona to Trieste and to Illirico). All the cities of Veneto have traces of the Roman occupation, but this is especially true of Verona (the Arena), Vicenza, Padua, Treviso, Altino, Oderzo and numerous minor cities along the most important communication routes. Christianity arrived in Veneto towards 400 and made Aquileia its principal center. In fact, it soon became a powerful patriarchal.