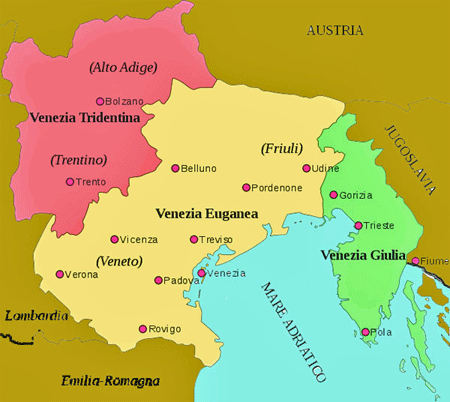 The physical configuration of Veneto, with its vast zones of hills, wealth of water and coastal lagoons abounding with fish, favored its being peopled as early as the paleolithic era. Fossils dating back to about 150,000 years ago have been found in the hilly zones north of Verona; others, from the successive epoch, in the Berici Hills, on the Plateau of Asiago, in the Monti Lessini, and on the Montello.

Remains of palafitte have been found on the banks of Lake Garda and on those of a few small lakes in the Berici Hills, while there are a lot of remains from the neolithic era (polish stone) and the Bronze Age scattered everywhere. These populations were formed by the Euganei (of Indo-European origin), the Reti ( Verona and the pre-Alpine zone) and other minor groups (at times having Danubian affinities). Then, later, the presence of the Etruscans was also ascertained, especially at Adria (from which the name of the Adriatic Sea was taken).

Around 1,000 B.C. the region was invaded by the Heneti, a people coming from the zones of the Black Sea. Some of them then settled down, especially in the Euganean Hills, while others continued their migration as far as Brittany in the northwestern part of France where they were where they were later conquered by Caesar). In the Euganean Hills the Heneti or Veneti gave birth to a lively and quite interesting civilization which had its own language and writing “Venetico”. This was called the “Atestina Civilization” because Ateste (Este) was its principal center, although it quickly spread throughout the region.

These Veneti (Venetians) were in touch with the Etruscan and Danubian peoples, trading in bronze objects, salt wool and ceramics, while the Euganeans were conquered or pushed back into the mountainous zones. They had to defend themselves from the invasion of the Gauls who was descending from the central eastern Alps. When these raids proved too numerous and violent, though, they preferred to ally themselves with the Romans. They were finally absorbed by the latter and disappeared. There are two important museums on this civilization, one at Este, the other at Pieve di Cadore. Other important centers of the Veneti were Padua, Vicenza, Feltre, Treviso, and Ceneda (Vittorio Veneto).