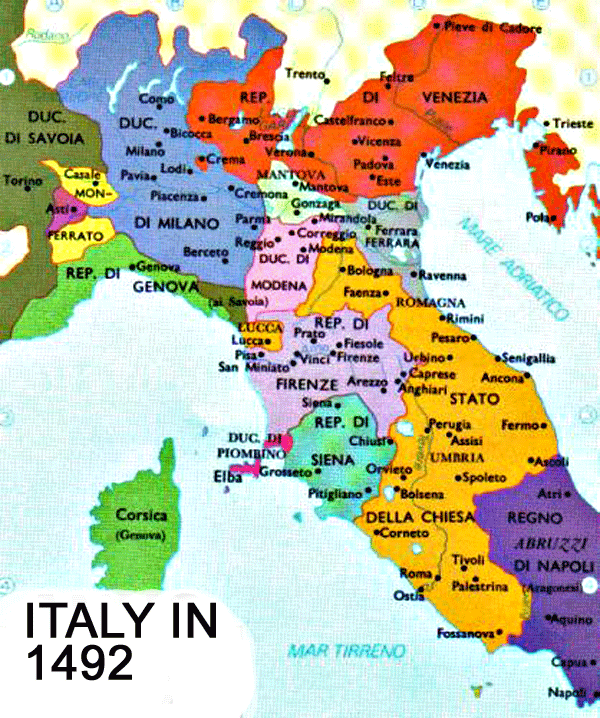 With the defeat of the Longobards in 776, the Veneto territory (excluding Venice) was dominated by the Franks, who substituted dukedoms, sculdascie and gastaldati with their typical feudal organization (that is to say counties and marches , as the famous one of Treviso).

The gradual break-up of imperial authority in such cities as Padua, Treviso, Vicenza, Verona and Ceneda brought about the rise of powerful local jurisdictions. These were backed by castles scattered throughout the countryside, which were in the hands of various feudal lords such as the S. Bonifacios, the Salinguerras, the Estensi, the Da Baones, the De Lozzos, the Trissinos, the Maltraversos, the Da Carraras, the Da Caminos, the da Romanos, etc.; these were constantly fighting amongst themselves for the control of the land and the cities. In such cities as Padua, Rovigo, Verona, Vicenza, and Feltre, the figure of the Bishop-Count (or that of the Bishop-Warrior at Belluno) became increasingly prominent, as did the power of the bourgeoisie, the soul of the rising municipalities.

In the XIIth century all of the major towns in Veneto were made into municipalities, which had their own independent forms of government (in the mountainous zones there were the Comunita).

In 1164 Verona, Vicenza, Padua, Treviso and above all Venice united in the Lega Veronese, forcing Barbarossa to retreat. This League then joined up with that of Pontida to form the famous Laga Lombarda (1167) which, guided by Alberto da Guissano, defeated the Emperor at Legnano (1176), forcing him to the Peace of Costanza.

During the XIIth century these municipalities were also torn by internal struggles and, gradually, various feudally derived seigniories emerged, they too in a continual struggle amongst themselves: Ezzelino Da Romano, already imperial vicar of Frederick II, succeeded in extending his dominion over the entire Veneto region) excluding Veneto and Rovigo): A Guelph league finally defeated him at Casssano d’Adda in 1259. Verona then passed to the Scaligeri, Treviso and Belluno to the Da Caminos, Padua and Vicenza to the Da Carraras, while Rovigo remained in the hands of the Estensi, and Venice, which so far had remained isolated, became interested in the mainland.

The XIVth century was characterized by continuous wars between these powerful seigniories, some of which aimed at conquering all of the northern area of Italy and the adjacent zones in order to create a large continental state (the Carraresi of Padua, the Cangrande Della Scala and the Visconti of Milan).