Lake Doberdò and the Lake Circonio (Cerknica, Slovenia) are rare examples of Karst lakes in Europe. Lake Doberdò is in a hollow created by the lowering of Karst highlands and is fed by an underground network formed by the Isonzo and Vipacco rivers. When the level of these rivers decreases, the water of the lake runs out through swallowholes, sometimes creating a network of very strong currents. 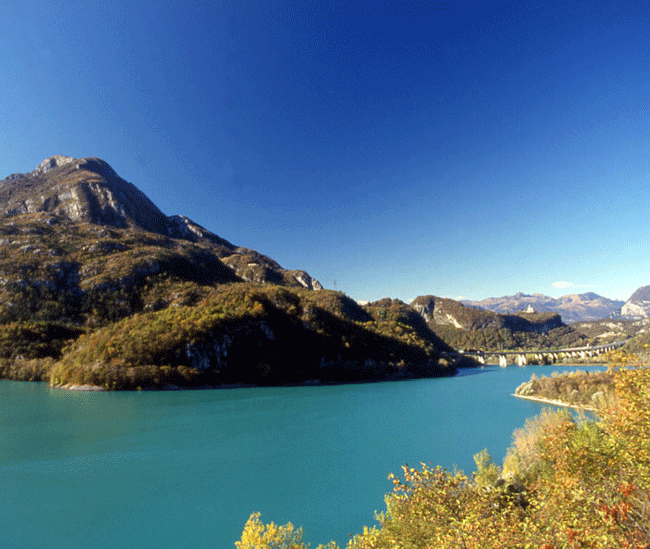 The wetland is an exceptional landscape which stands out against the varied, mainly arid, Karst landscape and also offers other different habitats. This reserve is located in the municipalities of Monfalcone, Ronchi dei Legionari and Doberdò del Lago (Doberdob) where a visitors’ centre provides information and educational information about the area. The “Conver” visitors’ centre, not far from the Pietrarossa lake, will soon be inaugurated. It will host many projects aimed at restoring the barren Karst land and reintroducing the local Karst sheep.

The whole reserve can be explored by taking the many trekking itineraries leading to panoramic observation points or, military tracks leading to the remains of old trenches.

The resulting wetland is basically an almost completely filled-in marsh, where different species of vegetation are arranged in seemingly concentric rings, each corresponding to the varying depth of the water. They range from the snowdrop related sedges (Leucojum Aestivum), and their impressive flowers, the Phragmites Australis bulrushes and further out, to the aquatic plants such as the water lily.

The fauna also includes the olm (Proteus Anguinus) an eel-like salamander which is endemic to this area.

Particularly interesting is the small Pietrarossa Lake, which is completely immersed in riparian vegetation and surrounded by grey willows which grow densely along the shores: an important refuge for many water birds which seem to live undisturbed and effectively protected by the thick vegetation, and totally unaffected by the noise from the nearby highway.