GUIDE TO THE PICCOLO DOLOMITE MOUNTAINS

A small group of Peaks that sit above the town of Schio in the Vicenza Province. The group is made up of Pasubio, Craega, Cornetto and Cinque Croce. The peaks are just over 200 meters and have the same rugged shape, with individual towers, like the Dolomites. Thus they get their name as a smaller version of the Dolomiti. The area was part of the Italian Front during WWI with some intense fighting occurring. Ernest Hemingway was sent to the Red Cross section in Schio when he first arrived in Italy to support the Army Group making attacks on this front. 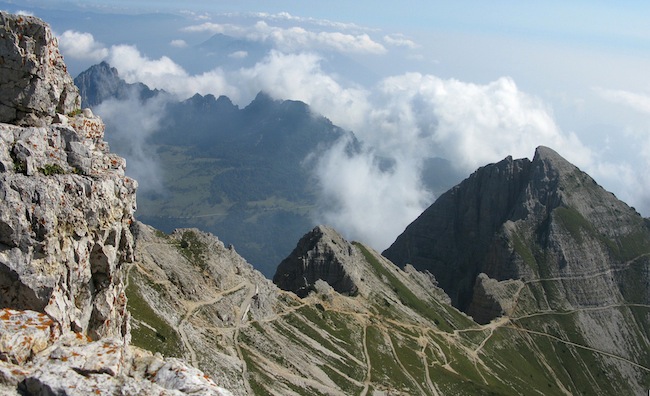 The Piccolo Dolomiti and Recoaro Mille act as a crown to Recoaro Terme and include the groups of Carega, Sengio Alto, and Pasubio. The tourist attractions in this zone are also outstanding (climbing, excursions, summer and win­ter vacations, snow sports). The plateau of Tonezza del Cimone and the Fiorentini, which is still in the Vicentine area, is crossed by easy new roads; a new residential zone is being built on the Fiorentini; the beautiful snowfields of the zone of Toraro, Campomolon, and Melegnon are being equipped with modern tow equipment.

TOWNS OF THE PICCOLO DOLOMITE GROUP