GUIDE TO THE SELLA MOUNTAIN GROUP

The Sella group (Sellagruppe in German) sits in the heart of the Dolomites. It lies as an isolated range, surrounded by the valleys of Gardena/Gröden and Badia/Gadertal (in Alto Adige, Bolzano Province), Fassa (in Trento Province) and Livinallongo (in the Belluno Province). These  valleys are also known as 'Ladin valleys, as here the ancient Ladin language is still spoken; because of this, these five valleys collectively form the cultural region known as 'Ladinia'. 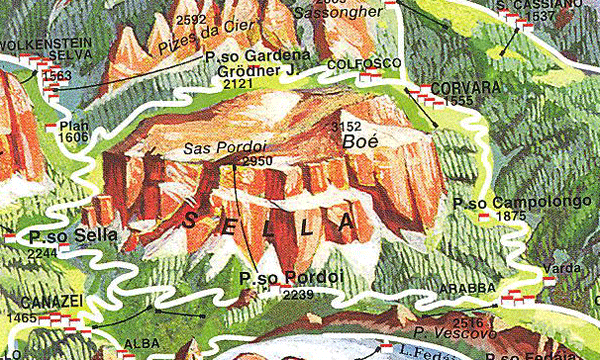 The Sella Mountain Group is characterized by a high plateau, situated in an almost suspended fashion on the summit, out of which the highest peak of Piz Boè stands out (3,152 m). It is an important tourist destination, both during the summer season for excursions, and in wintertime for skiers, who have the possibility to take a circular trip around the mountain, known as ‘Sellaronda’. This excursion can be embarked both clockwise or anti-clockwise, and it is often marked as one of the highlights of a visit to the Dolomites, for its majesty and the constantly varying views it commands. Also, Cyclist circles the mountain in the warmer months, and each year 1000's participate in the Gran Fondo.

In 1864 the unspoiled wilderness of the Sella group was officially summited, and its highest summit, the Piz Boè. Even though, all the paths and trails that led to the top were already known to local villagers, and especially to chamois hunters.  This mountain is defined by some as a “rock chateau” of spectacular forms and one of the most photographed formations in the Italian Dolomites.

MAIN PEAKS OF THE SELLA GROUP

MOUNTAIN HUTS IN THE SELLA GROUP

TOWNS OF THE SELLA GROUP