Towns Of The Veneto Region 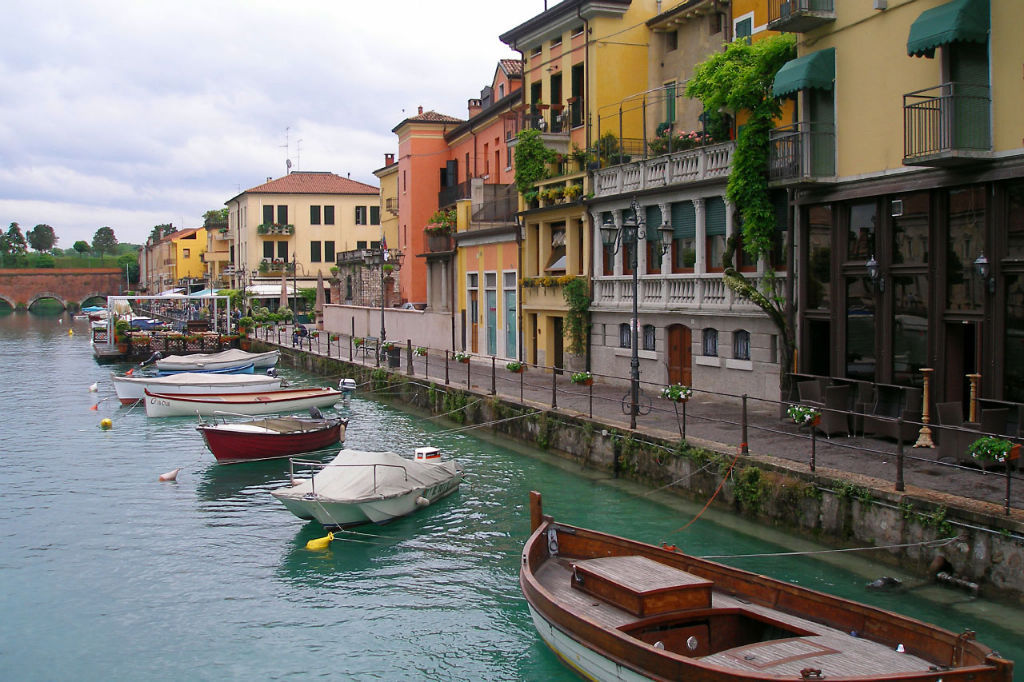 A fortress city in the shape of a pentagon Peschiera del Garda is a jewel of architecture, art and culture placed at the southern end of the "Riviera of the Olives", the classical name of the eastern shore of Lake Garda. Sitting just 25 km west of Verona, the town rises where the Mincio river leaves the lake. The course of the water was changed to build the fortress, making three separate canals which surround Peschiera and then join again south of the town. Today the area is included in the Mincio Natural Park, whose fascinating landscapes can be enjoyed also thanks to a long cycling route following the course of the river from Peschiera. The economy today mostly based on tourism and wine production, especially the Lugana white wine.

A transit point between the Alps and the Po Plain, Peschiera was always of great strategic importance and a trade center. Human settlements on stilt houses were found in many areas, at least seven villages, in 1851, by German archeologists Keller and von Sacken, who named from the area a period of the Bronze Age, the Peschiera-Zeit.

In Roman times there was vicus named Arilica, described by Plinius the Elder for its wealth of fish, which probably gave rise to the town's coatofarms, two eels with a gold star. At the time of the Barbarian invasions, Pope Leo I stopped here Attila in 492. In the 8th century the name was changed to Peschiera. In the following centuries the town followed the destiny of Verona, and was a key center in the city's military system. In 1387 it was conquered by Gian Galeazzo Visconti, lord of Milan and son of Regina della Scala, then in 1440 Francesco Sforza delivered it to the Venetian Republic. From 1549 the town was surrounded with defensive walls, following a plan design by Guidobaldo della Rovere, and later Michele Sammicheli and Anton Maria Lorgna.

The wall system is an example of military architeture among the most complex in Italy, with the further feature of being surrounded by waters. In 1815 the congress of Vienna delivered Peschiera to the Austrian Empire, who turned it into one of the four corners of a strategic system of defence. In 1866 it was included in the Kingdom of Italy.

It was first part of the Lombard territory and then it became the domain of the Scaliger and Visconti families. Under the domain of the Serenissima Republic of Venice in the 16 th century Peschiera assumed its urban structure with the building of the Fortress and the surrounding walls, built by Michele Sanmicheli. Today, the bastions and alleys of the old town are home to shops, hotels and fine restaurants that delight the palates of visitors with plates belonging to the gastronomic traditions of Garda, such as "Bigoli with sardines" and Risotto with carp which is best served with Lugana, a DOC white wine.

The surrounding countryside is full of vineyards where you can bike along the long and winding cycle track that connects Peschiera to Mantua. Great place to walk or bike throughout the year.